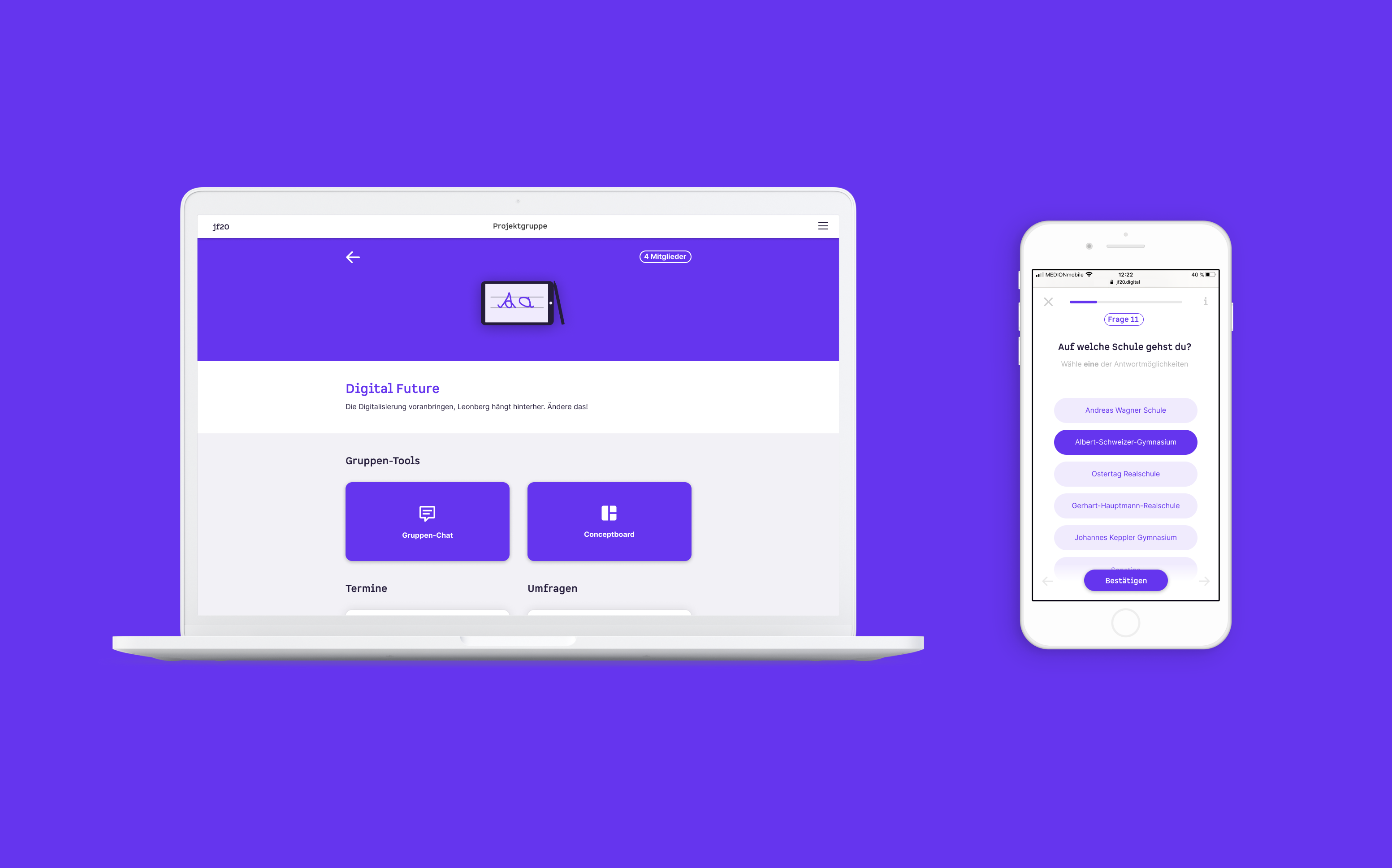 In cooperation with the city of Leonberg, I co-developed a digital youth participation concept in response to the Corona pandemic. The central element is an online platform, which I conceptualised, designed and implemented together with a small task force within 4 months.

The Youth Forum is an annual event where about 200 students come together for one day in the town hall. They collect their criticisms, concerns and wishes and discuss possible solutions in order to bring them to the attention of those responsible in the city of Leonberg. Due to the Corona pandemic and the resulting social distancing measures, the Youth Forum could not take place as planned.

In order to guarantee a seamless youth participation - even in times of Corona - the Youth Committee of the city of Leonberg decided to take the challenge as an opportunity to develop a pandemic-compliant concept.

It was particularly important to us that we did not just translate the analogue event into the digital space, but made full use of the new possibilities to develop an independent concept. The aim was to make the political participation process more attractive for young people and thus promote their engagement. At the same time, this event was to facilitate the transition to a more digital youth work.

At the beginning, we analysed previous Youth Forums to find out which parts of the programme were successful and why.

In addition, we also reflected on the function of the Youth Forum itself. Who is involved and what results do the stakeholders expect form such an event? 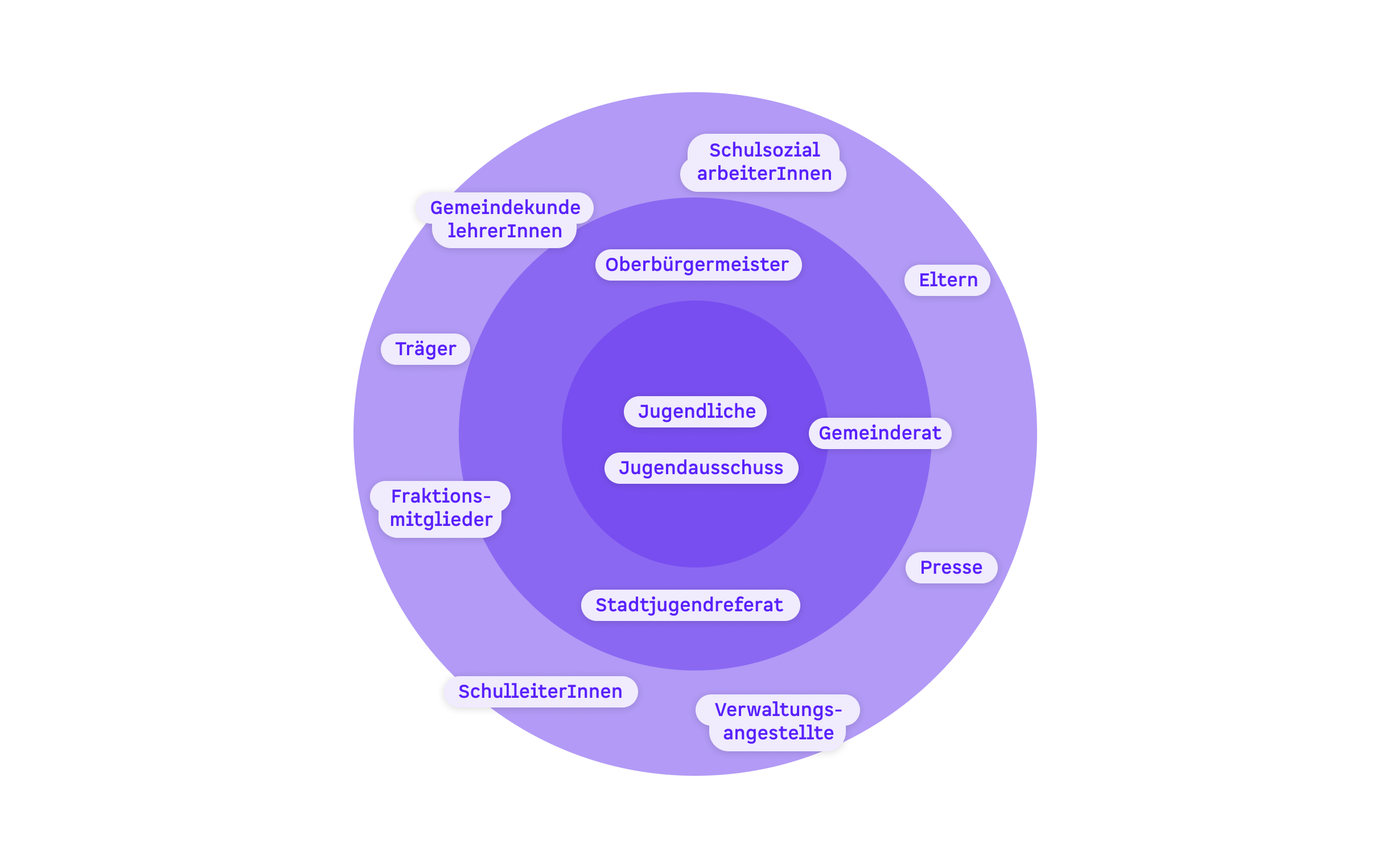 Unlike the traditional Youth Forum, the digital version does not experience any physical limitation regarding the number of participants. This means that a broader spectrum of young people can participate in the process due to its decentralised and low-threshold nature.
The increased number of participants makes it possible to obtain a more precise opinion of the youth of Leonberg, which can later be used as an orientation aid for the work in the Youth Committee.

We have bundled all these insights into a new concept. The basic idea was to divide the one-day attendance event into four phases, which take place over a period of two weeks.

The division into phases aims at forming small, motivated groups from a large number of young people who give a comprehensive opinion. These groups develop representative approaches to the topics collected and discuss them together with political decision-makers. Finally, the results are compiled and presented transparently to the public.

We have designed each of these four phases in such a way that they can take place both completely digitally and in face-to-face form. The modules created in this way can be combined with each other as desired. In this way, we have left open the possibility to react flexibly to the development of the pandemic. The main goal was to ensure that the Youth Forum could take place in any case.

The overall concept should be realised in the form of an online platform that accompanies the entire process. This digital HUB should provide the necessary content and functions depending on the phase in order to create a central interface to the young people. 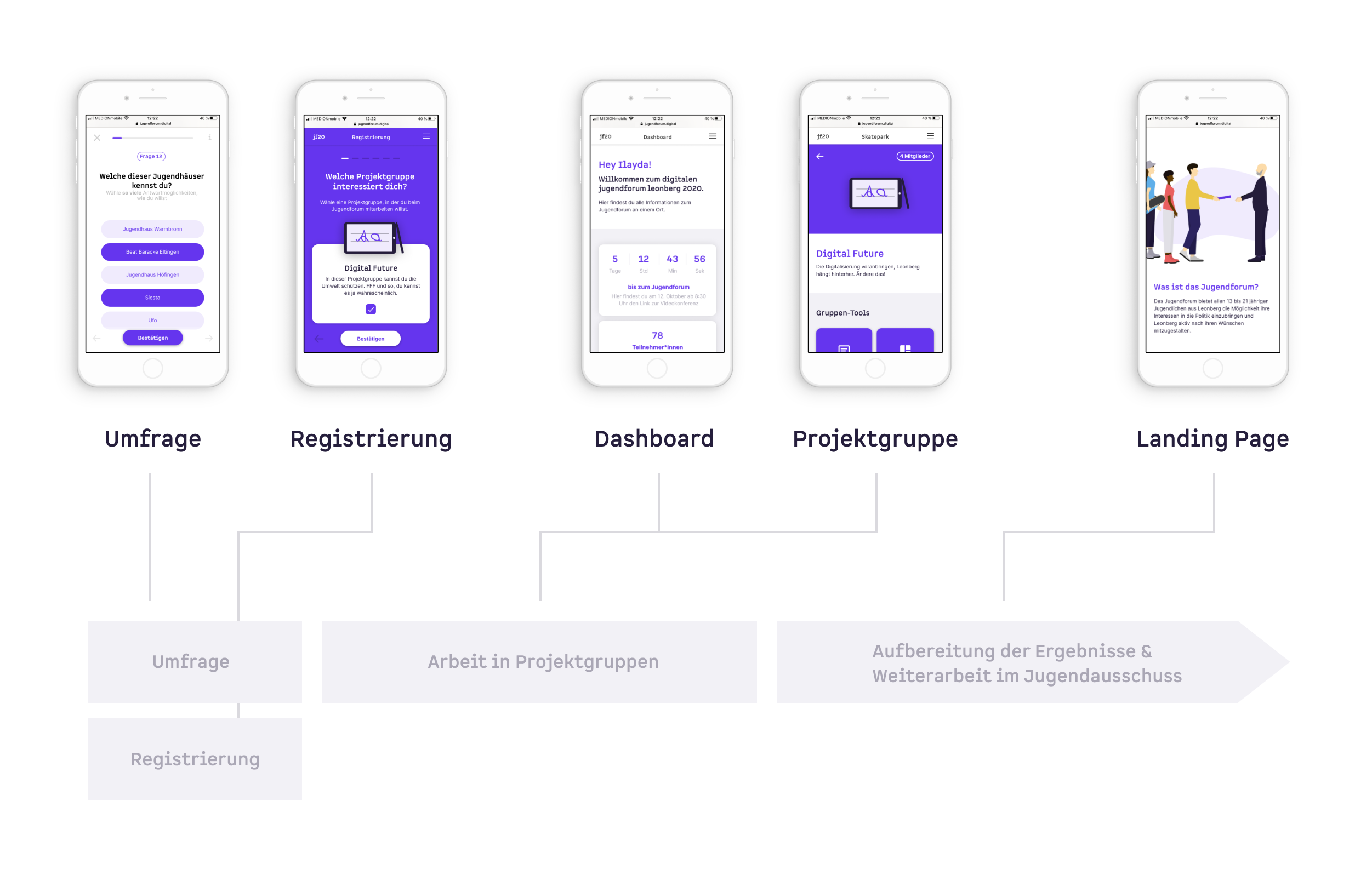 The tool has the task of addressing a broad and diverse target group. Accordingly, the user interface must have a low-threshold character that gives participants easy access regardless of any technical expertise.
‍
At the same time, it should convey a young and dynamic personality in order to be accepted by the young target group.
However, it must not appear too playful, otherwise there is a risk that the young users will not feel taken seriously. 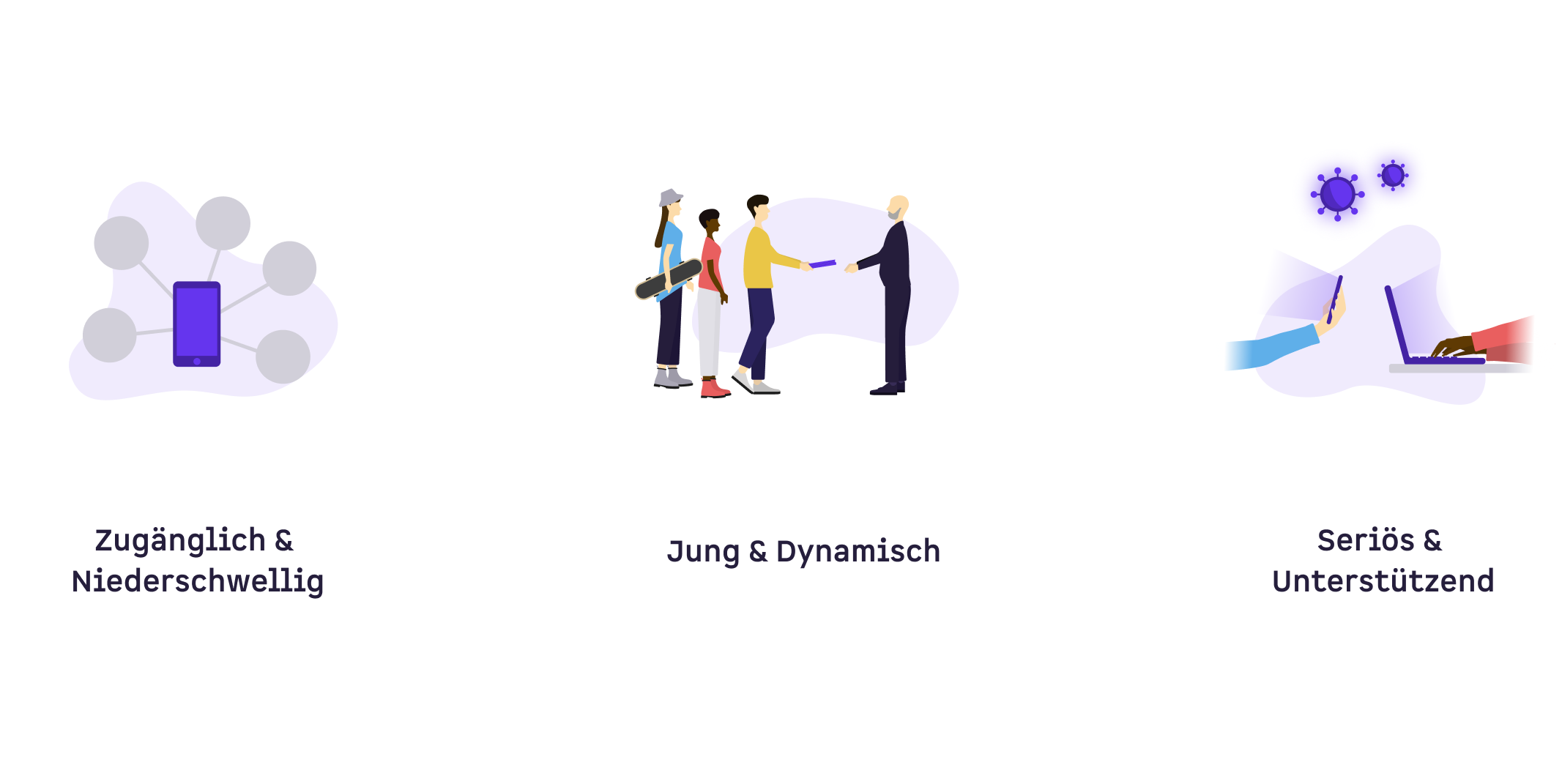 Based on our overall concept, we listed the required functions and contents of the web tool to get an overview of the upcoming scope of work.
Since we only received the final commitment for the implementation 2.5 months before the start of the event, we had to prioritise the functions. As a small interdisciplinary team with limited resources, it was particularly important to evaluate the tasks simultaneously from the frontend, backend and design perspectives. 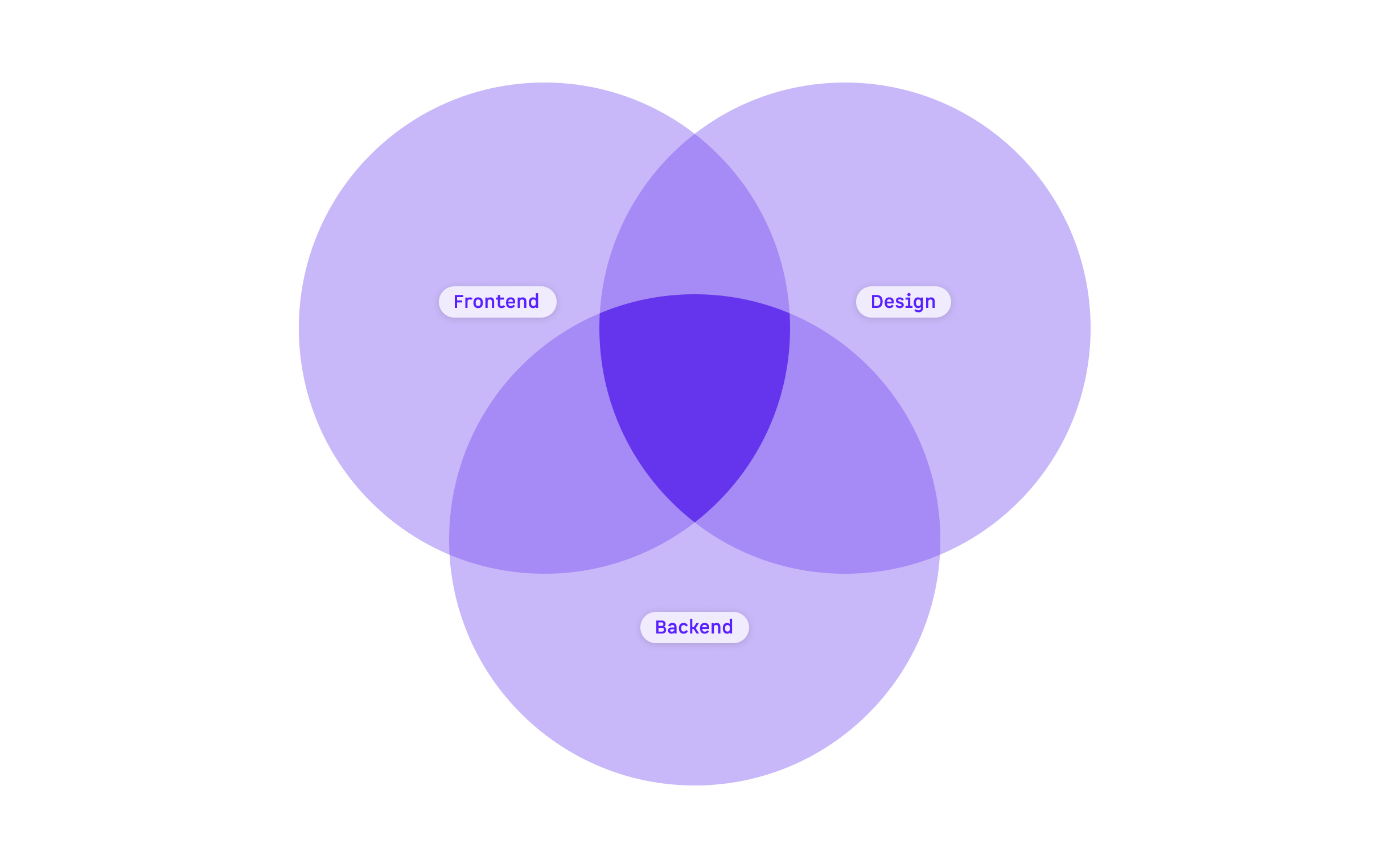 Only through this holistic view could we weigh the effort and added value of the functions against each other in order to prioritise them. Based on this list, we created a project plan for the next 2.5 months. 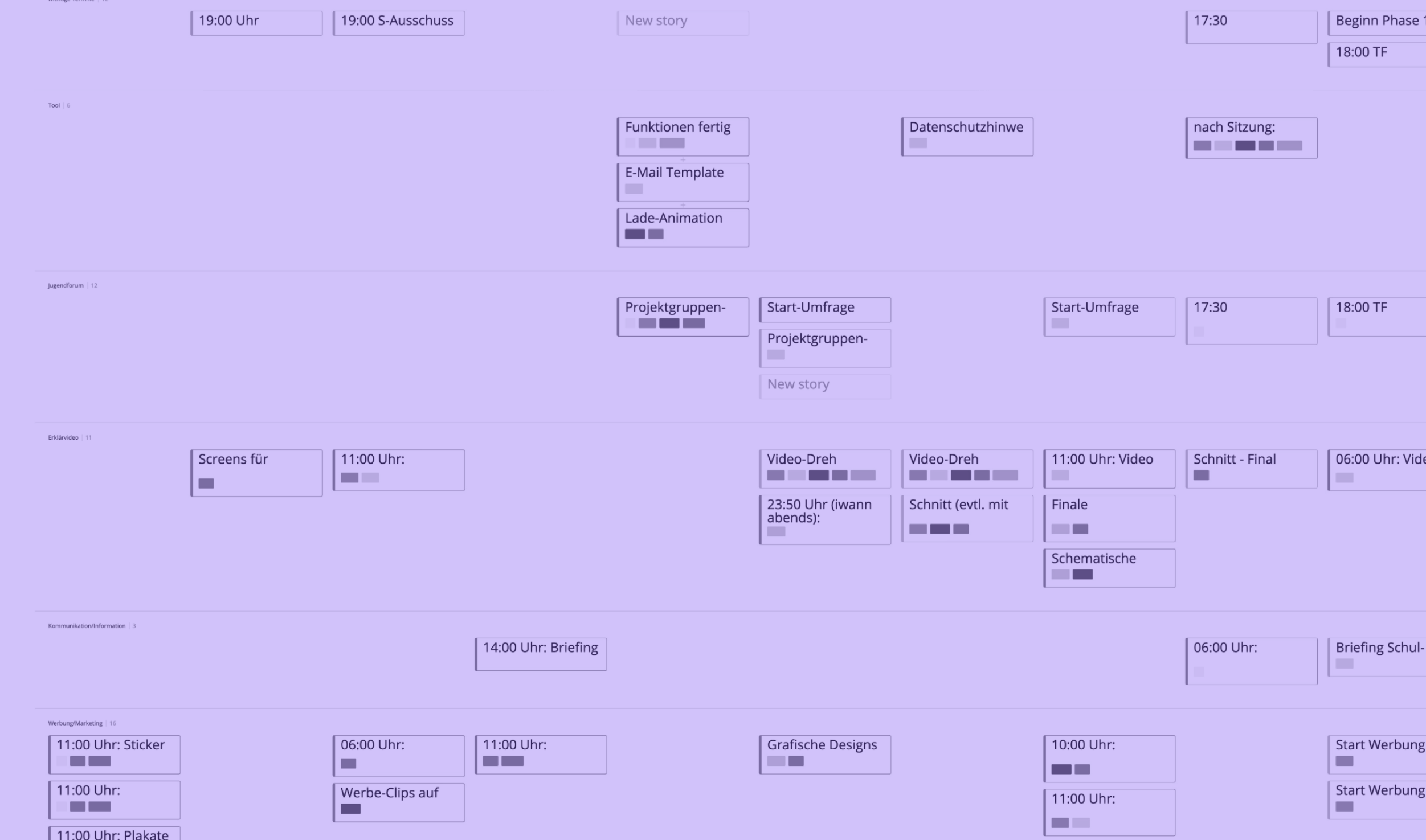 Due to the tight schedule, we had to start with the frontend development before the design process was completed, so that in the end we designed and developed simultaneously. Previously, I was used to having enough time and freedom for numerous iterations in the design process. This time, however, I was forced to pass on final designs to the frontend developer relatively quickly.
‍
In addition to creating new designs, I was in constant communication with the developers to ensure that the frontend was implemented according to the designs. 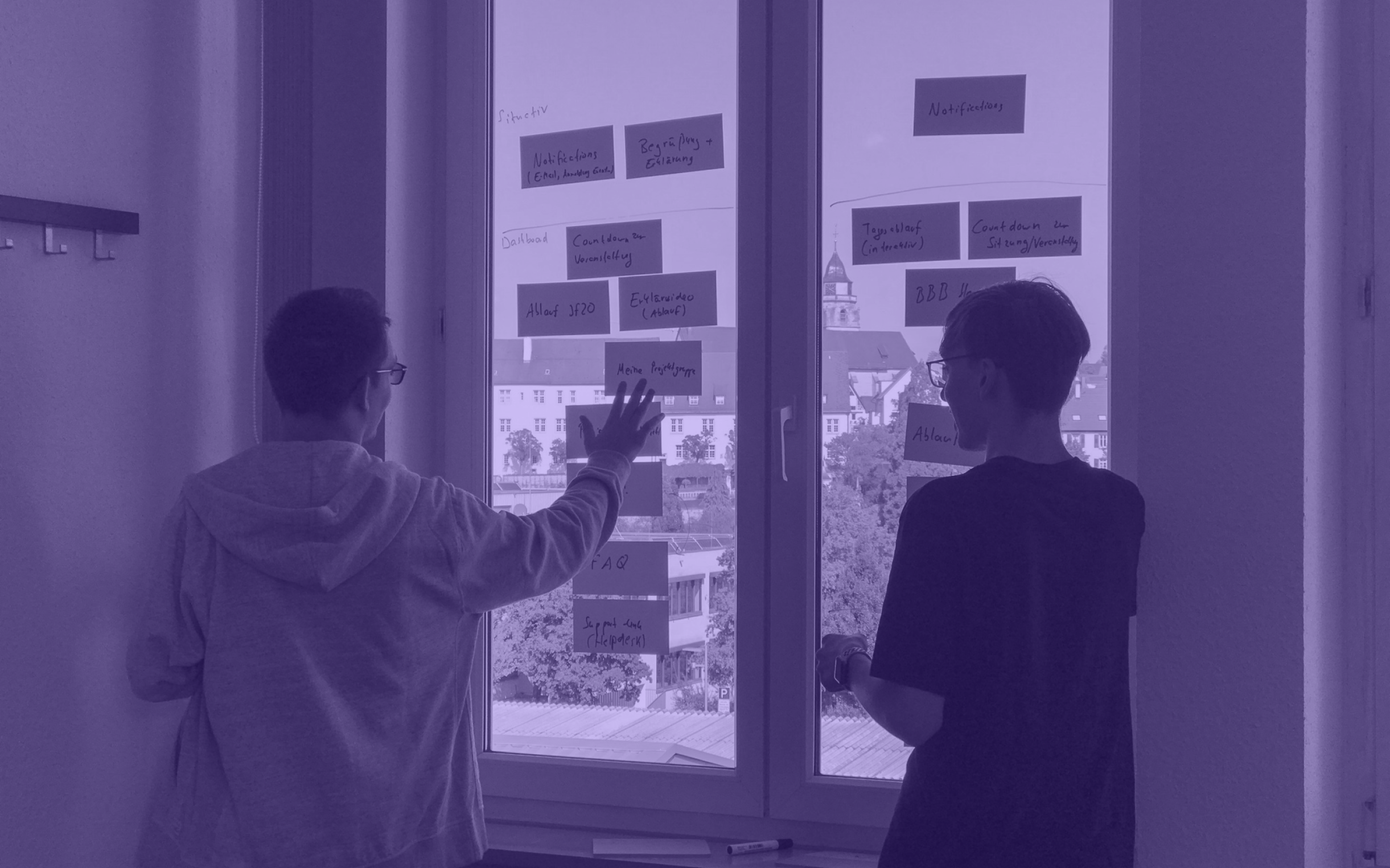 The previously formulated requirements had to be translated into brand and interface guidelines through the creation of a corporate identity. The aim was to create a striking and distinctive brand that would give the youth forum and the youth political actors an independent and self-confident appearance. Despite the young, fresh aesthetics, it was particularly important to meet the young people at eye level and to take them seriously. 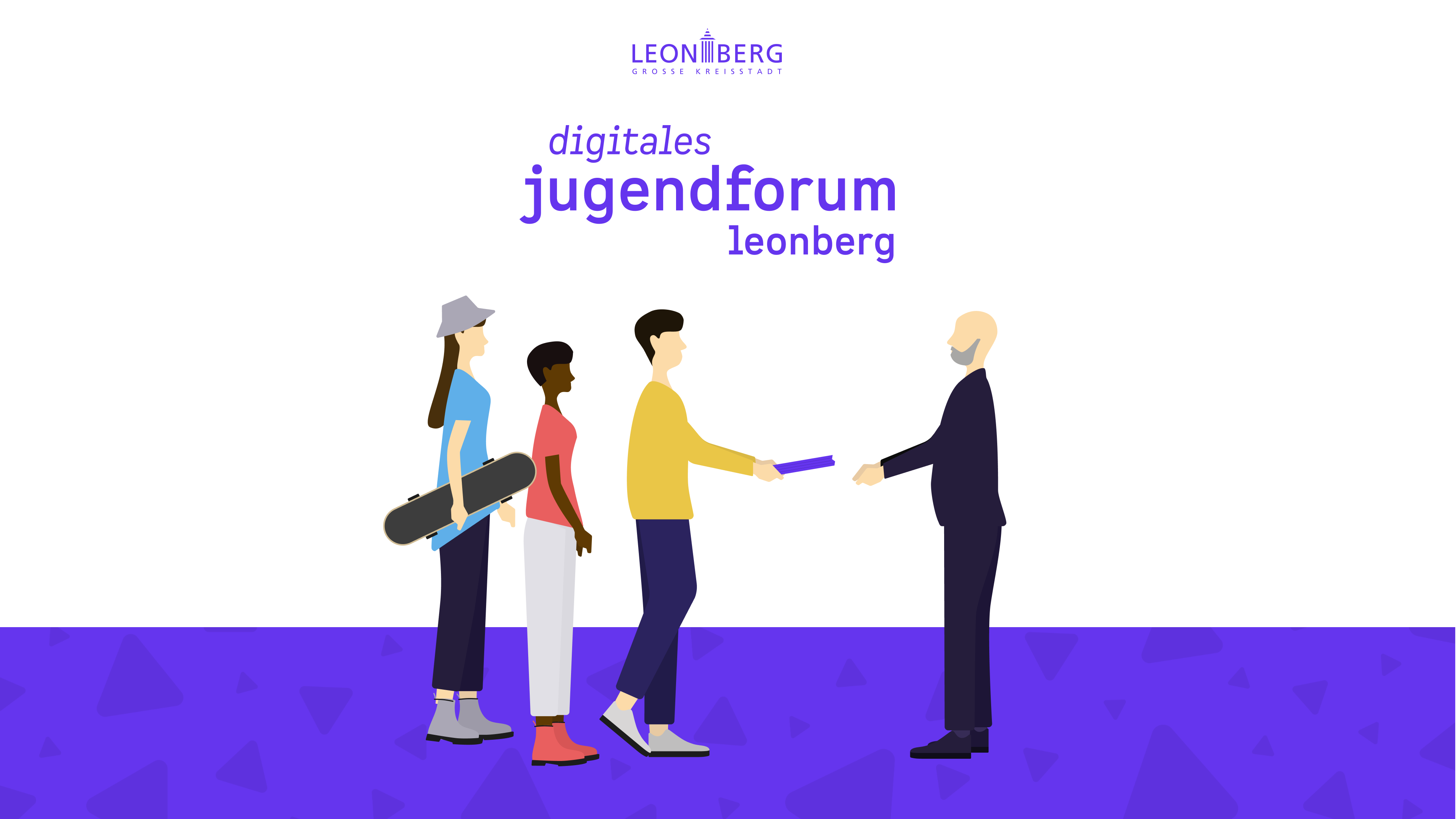 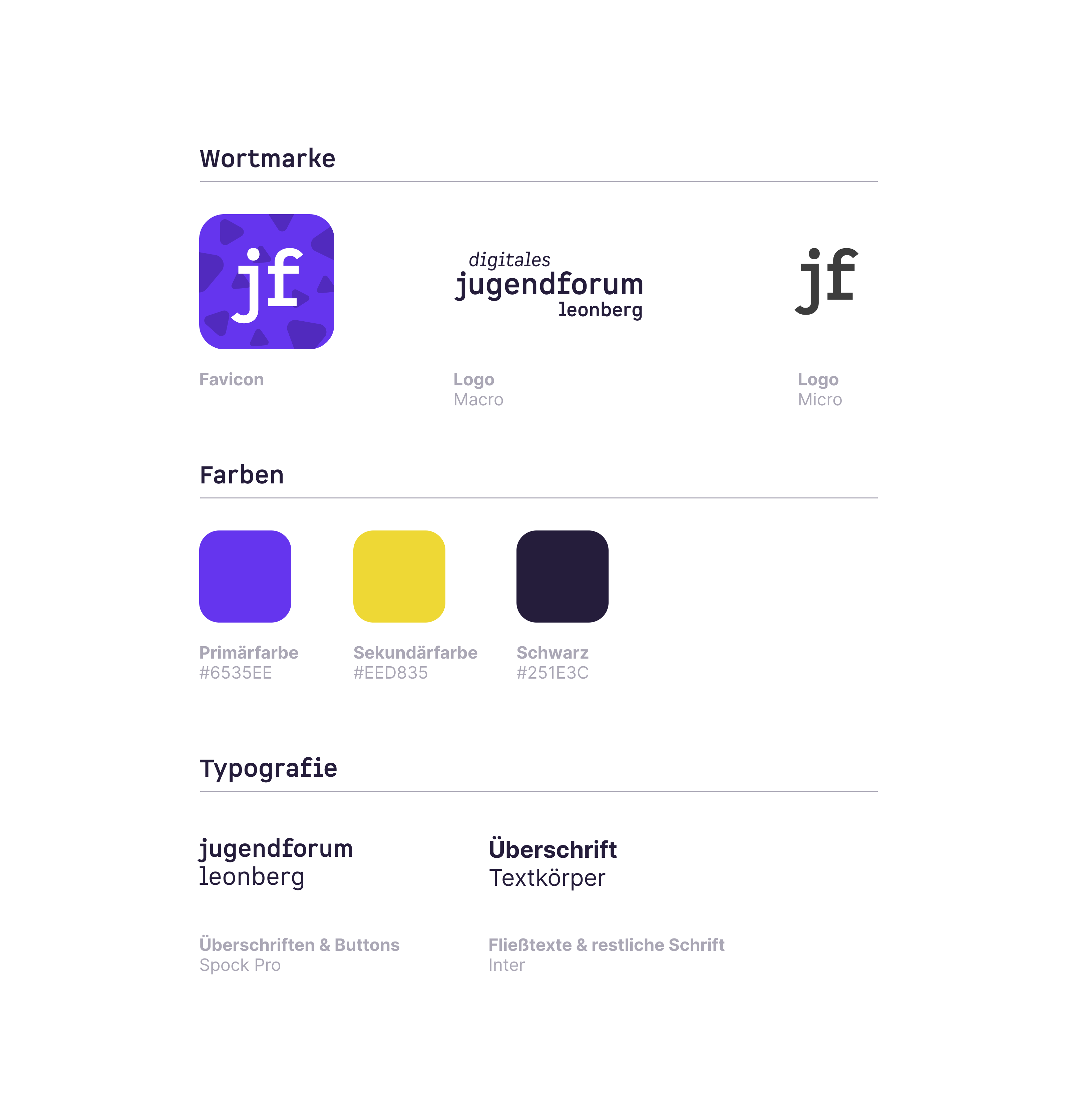 The striking Spock font combines the digital character of a monospace with the loud and friendly curves of a classic bold sans serif. The mixture of digital and human-analogue features ideally reflects this year's Youth Forum. 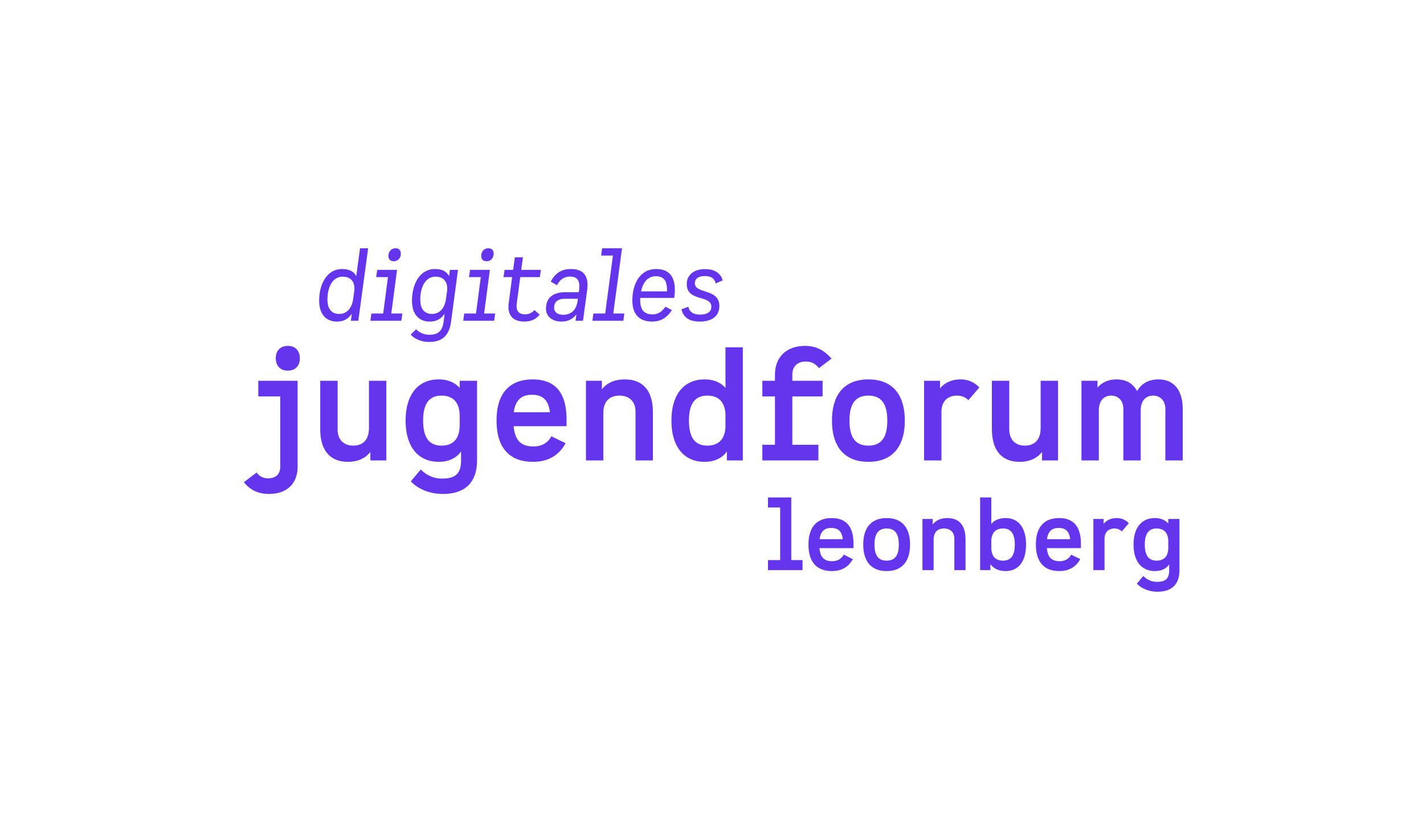 The "Blila" (purple blue) we chose conveys self-confidence and independence as a fresh, bright colour. Its luminosity makes it an eye-catcher and stays in the mind. 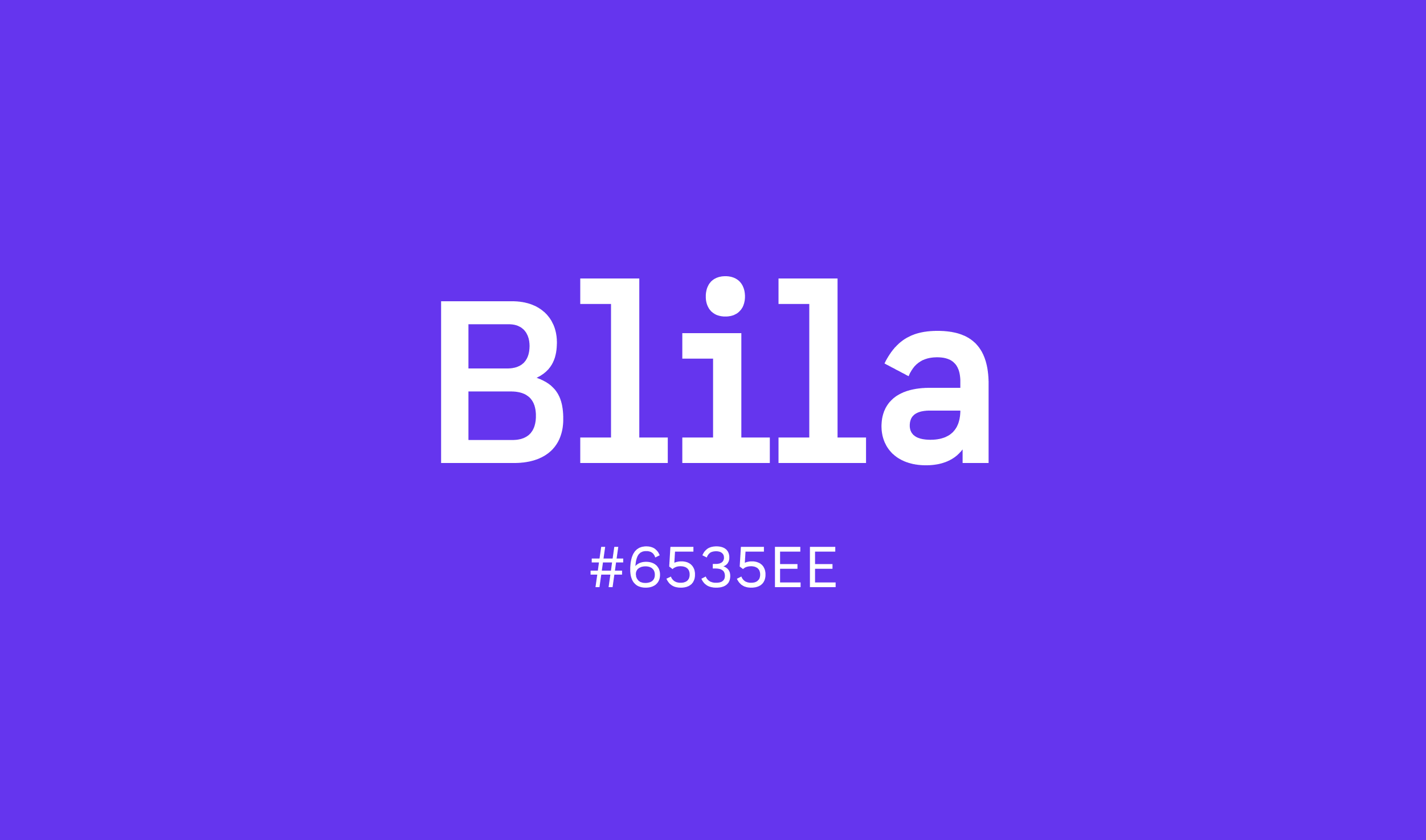 A website is a lower barrier than an app and makes the content and functions of our tool accessible to a wider target group. It also eliminates the need to develop for multiple platforms, which would not have been possible given the time.

We wanted to ensure that young people without access to a computer also have the chance to participate in the youth forum. Therefore, the focus of the design was on a functioning design for mobile screen sizes. From this, we could then more easily derive the responsive tablet and desktop views.

In a quick survey we wanted to reach as many young people from Leonberg as possible in order to get a broad understanding of the common opinion. 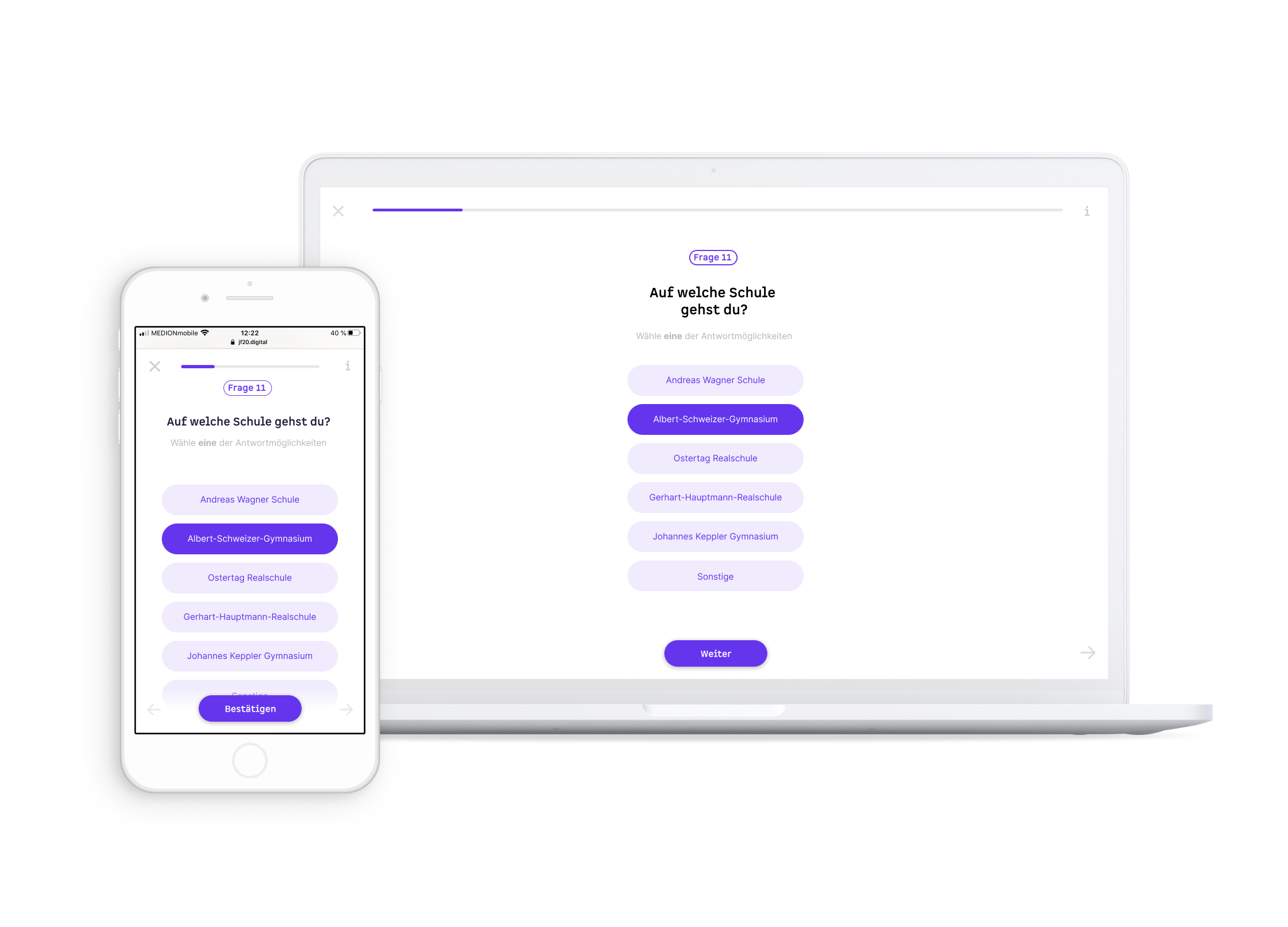 After the survey one can register for the live event. The participants can choose one out of 7 project groups. 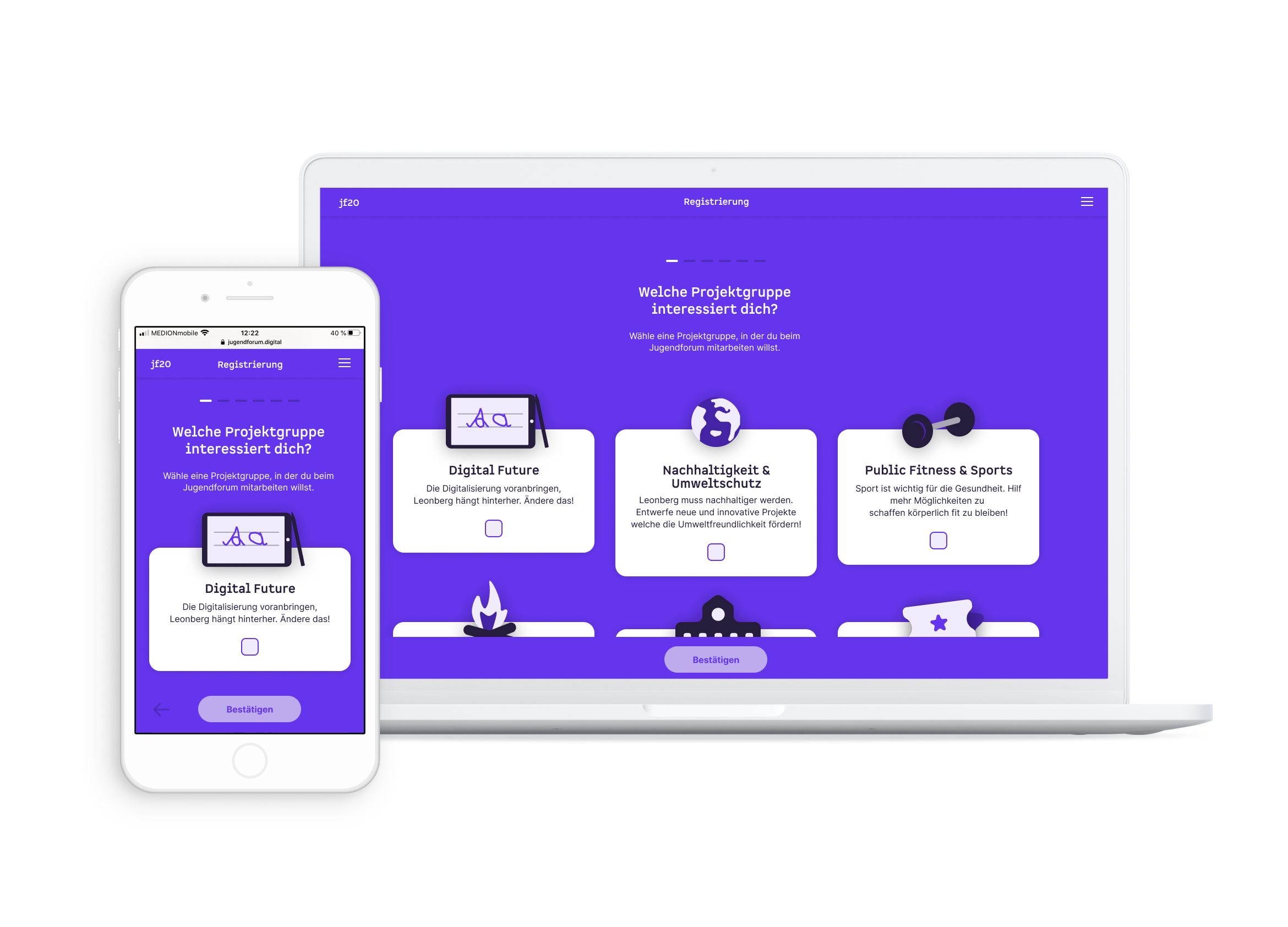 Once logged in the user gets all information needed until the final event takes place. 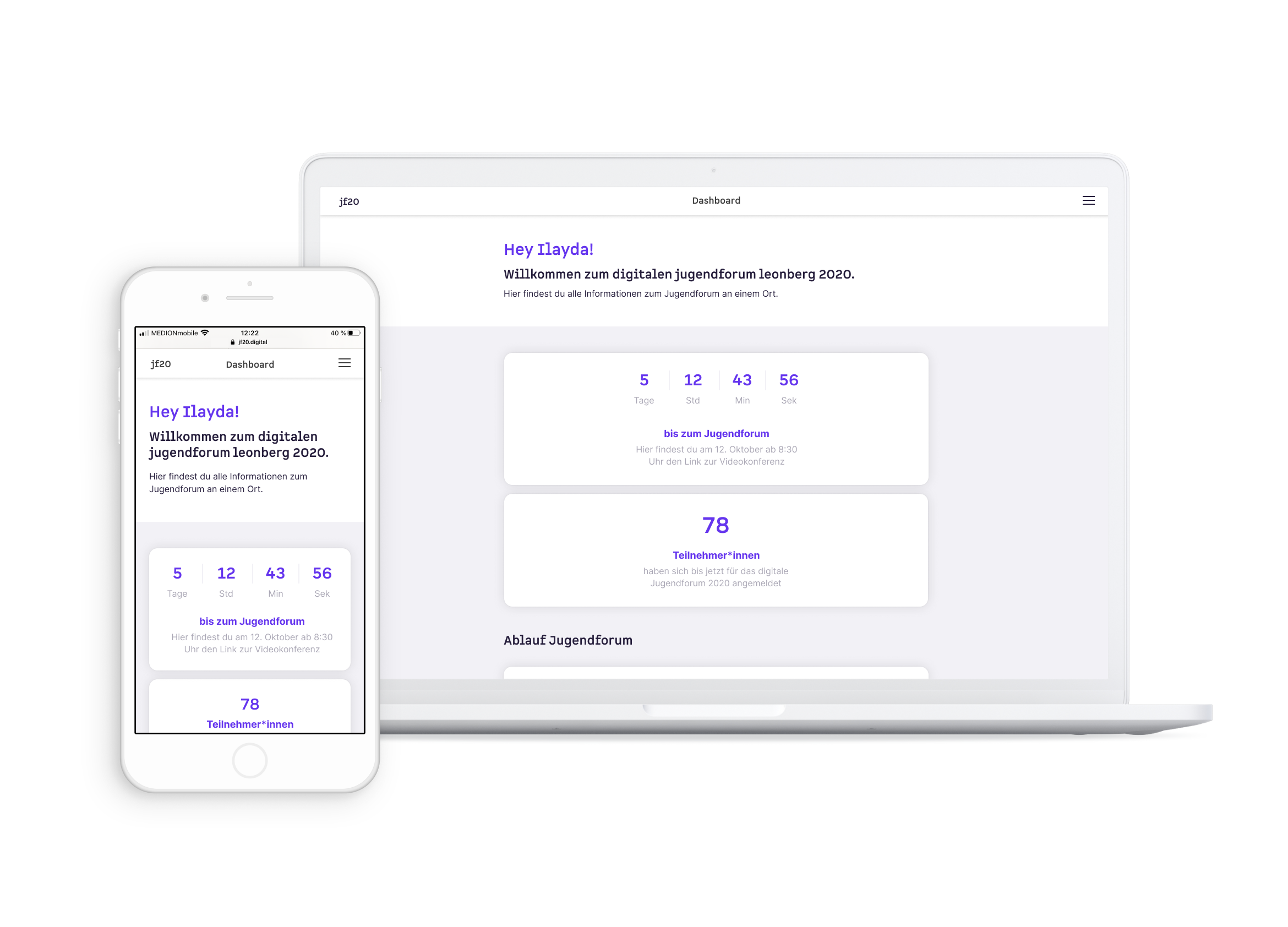 The user gets more detailed information on every project group, such as collaboration tools, group members, meeting dates and surveys. 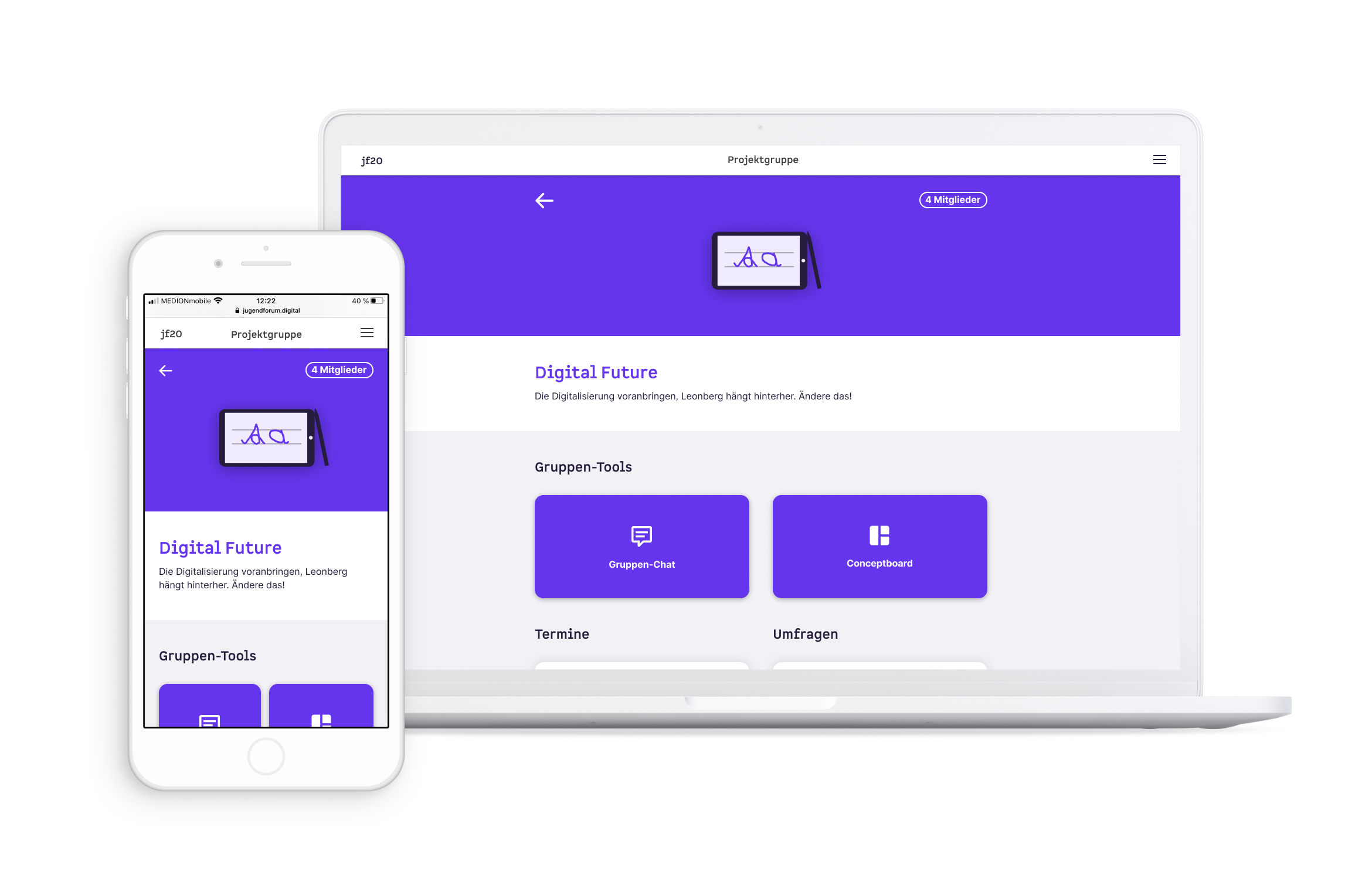 Over the course of the whole event the public has access to general information on the Youth Forum. 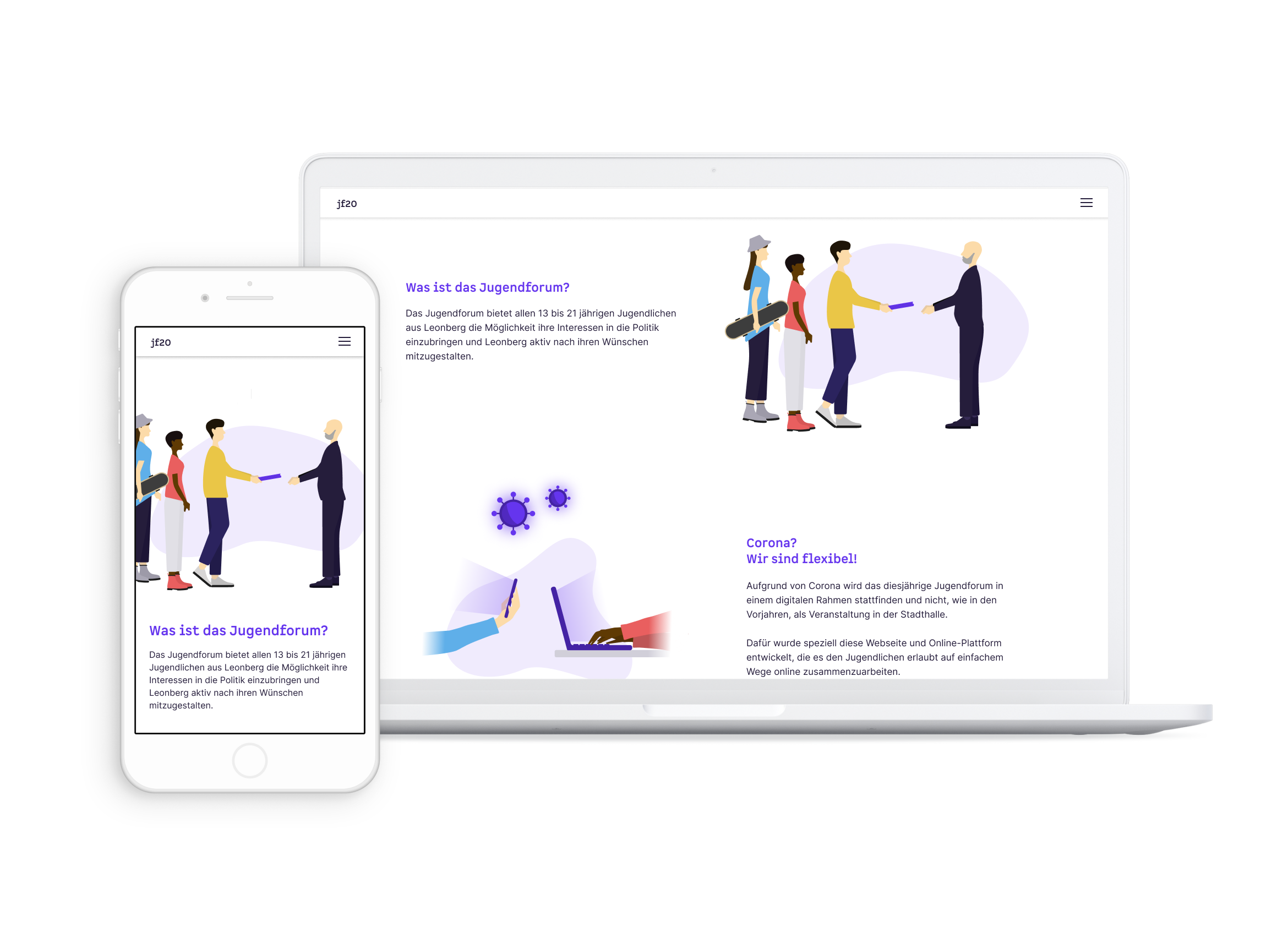 The development of the tool was only one part of the implementation of the concept. Simultaneously, we also took over the management of the communication channels and the creation of their contents.
‍
In doing so, we focused on schools as the primary information and promotion channel, as this is where the best persuasion can be done through trusted teachers and school social workers. We have formulated instructions for our contact persons in the schools to guide them in presenting the digital youth forum in the classes. 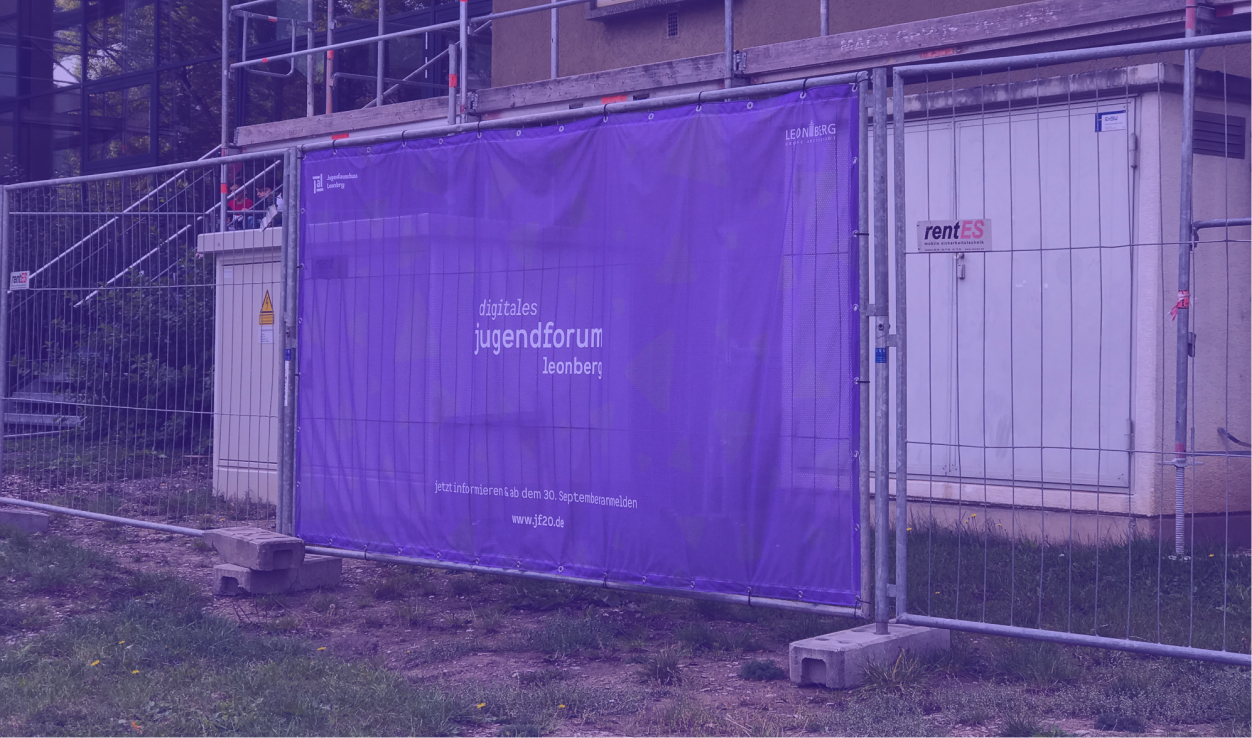 In addition, we produced a summarising explanatory video to be shown in the classes.

We also designed, animated and produced film content for the other advertising channels. Among other things, these were screened at the open-air cinema at the end of August. 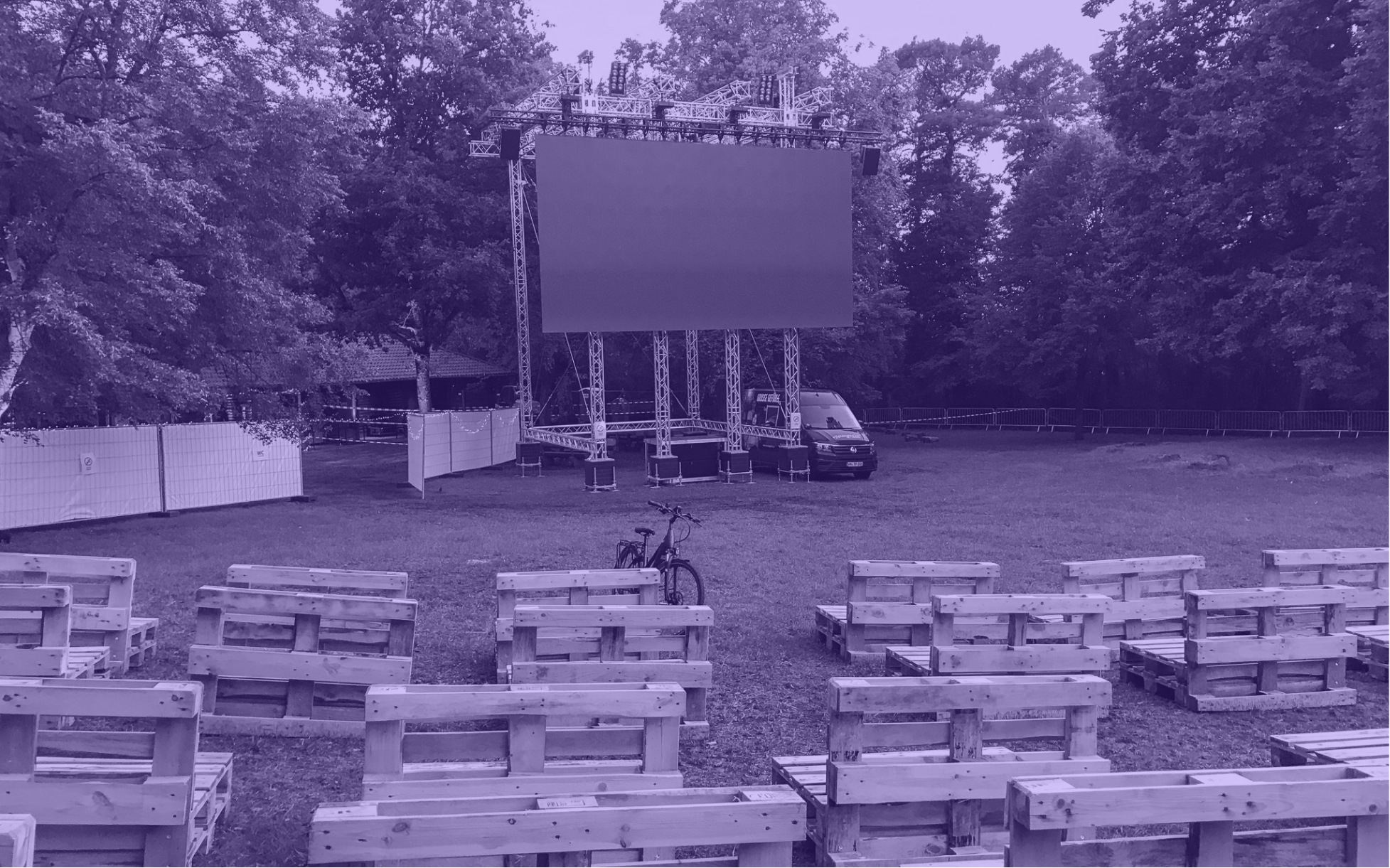 Besides school, Instagram was the most important advertising and information channel. Here we were able to get many young people to participate in the survey through static and animated content, which helped us significantly in gathering a broad opinion. 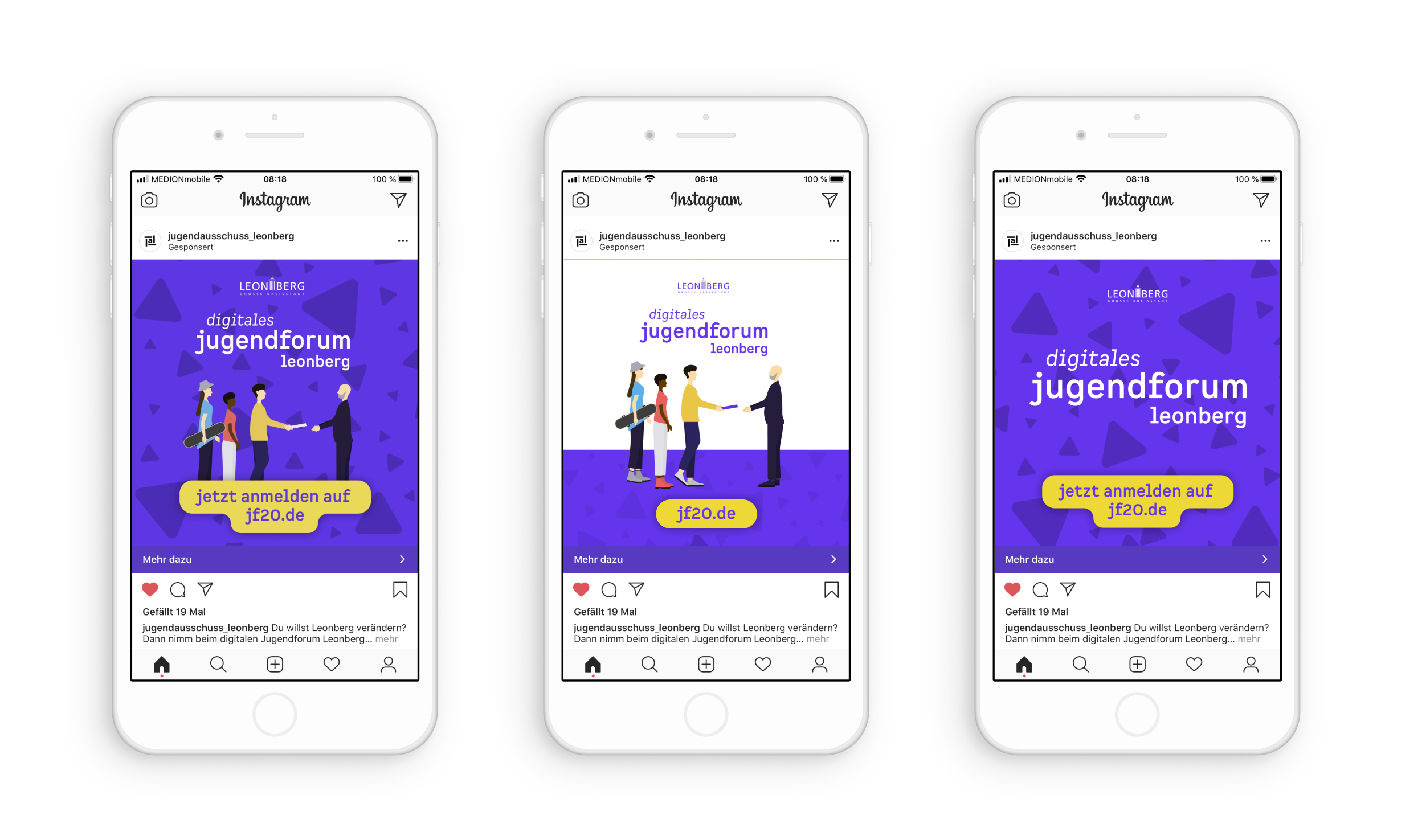 In order to create a connecting element despite the online event, we packed 90 small gift bags with merchandise and and snacks on the weekend before the event and delivered them to the participants. 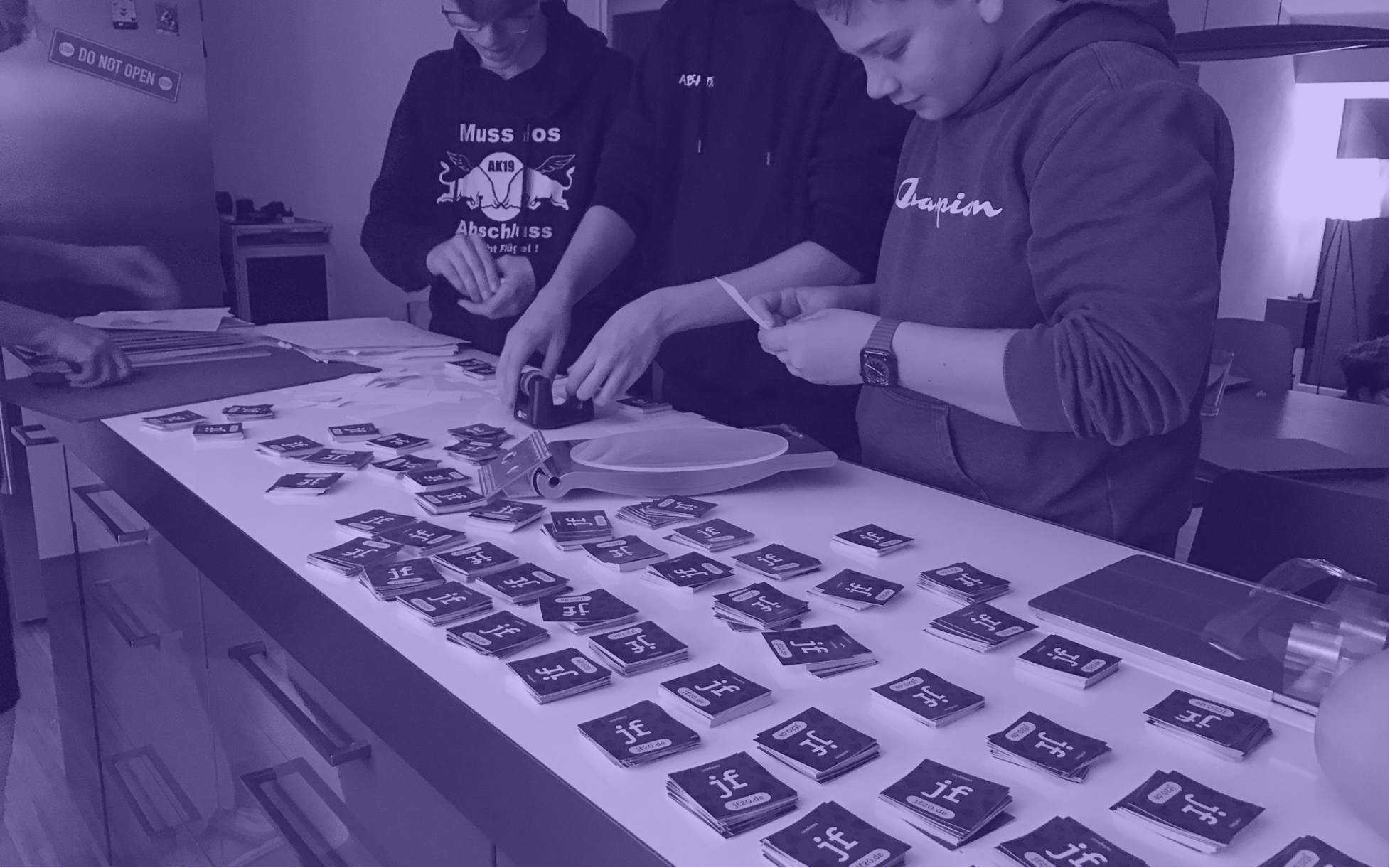 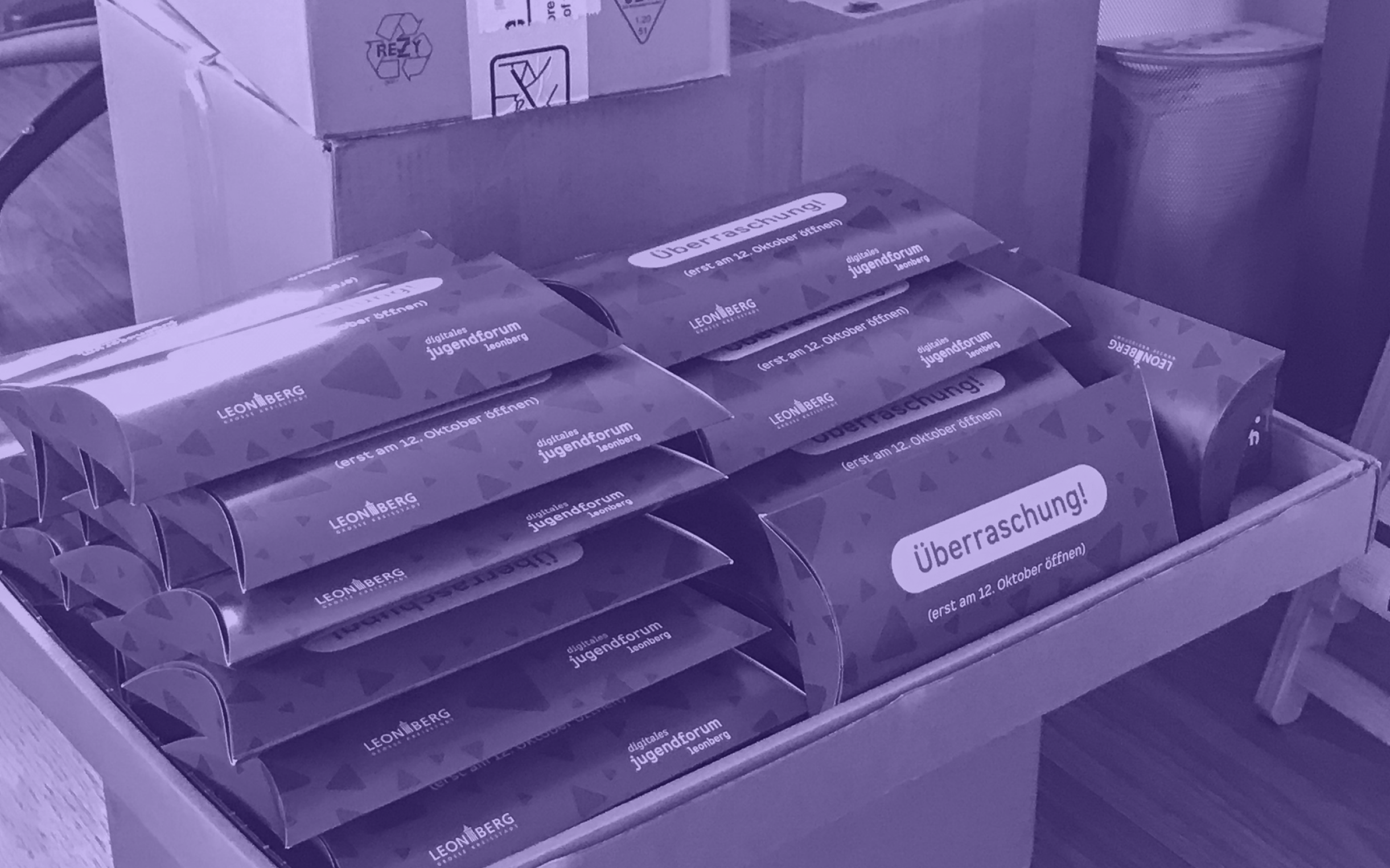 Three weeks before the event, we met again with the municipality to plan the final course of the event. The first draft of the phase envisioned that the young people would work independently on their topics in their project groups over a period of two weeks. After careful evaluation, we realised that this would probably not have been feasible due to a lack of motivation and self-discipline. For this reason, we decided on a one-day online event on 12 October. 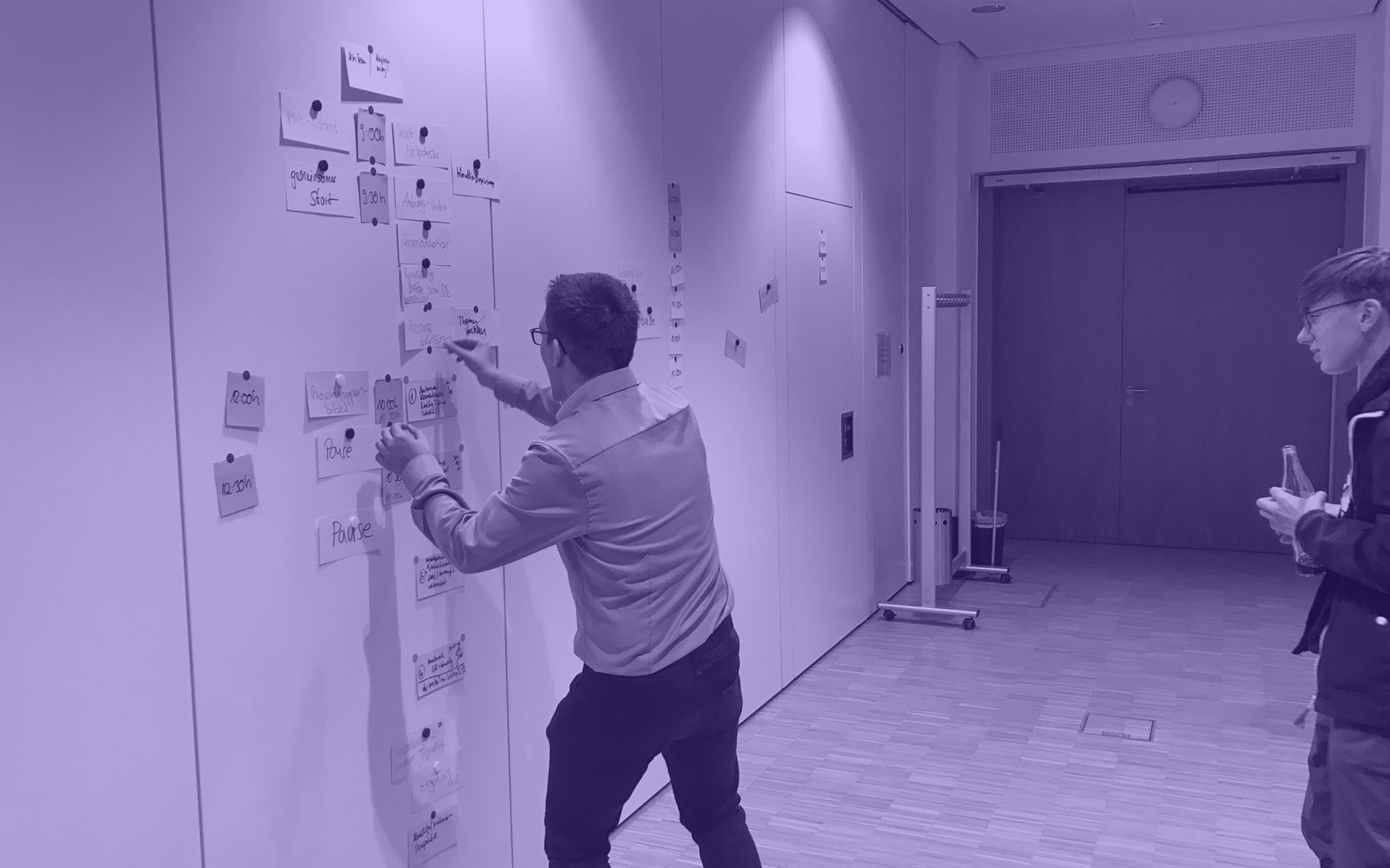 From 8:30 a.m., all participants could log into the Zoom conference via our web tool. After a welcome by the Lord Mayor, the young people worked on their topics in their pre-selected project groups in three rounds. Around 3 p.m., the groups had the opportunity to exchange their views with representatives of the parliamentary groups in small rounds. At the end, all project groups presented their results and appointed a representative to lead the group in further work. 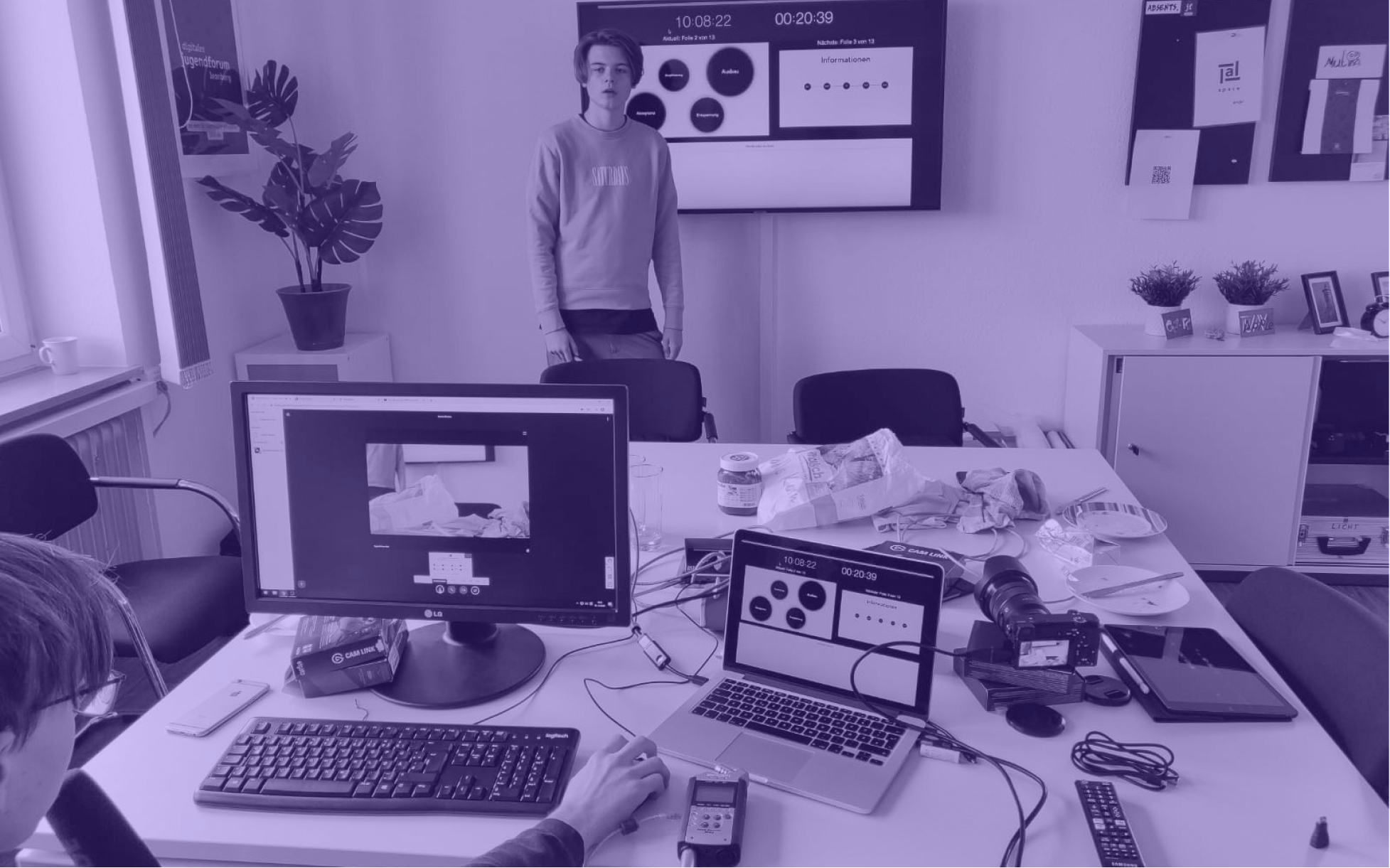 To facilitate the work in the project groups, we designed a concept board template which acts as a guide for the Team Leaders. 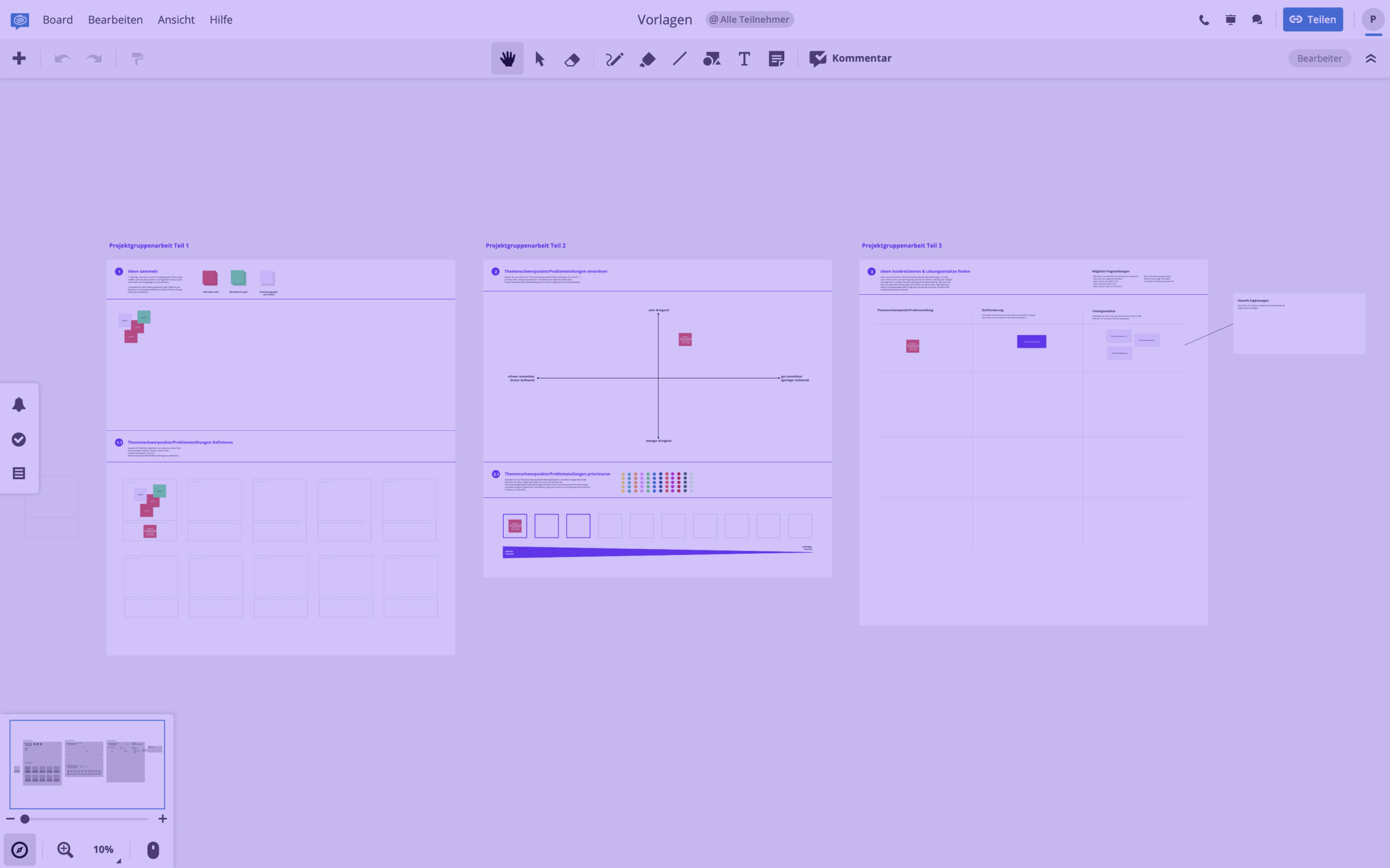 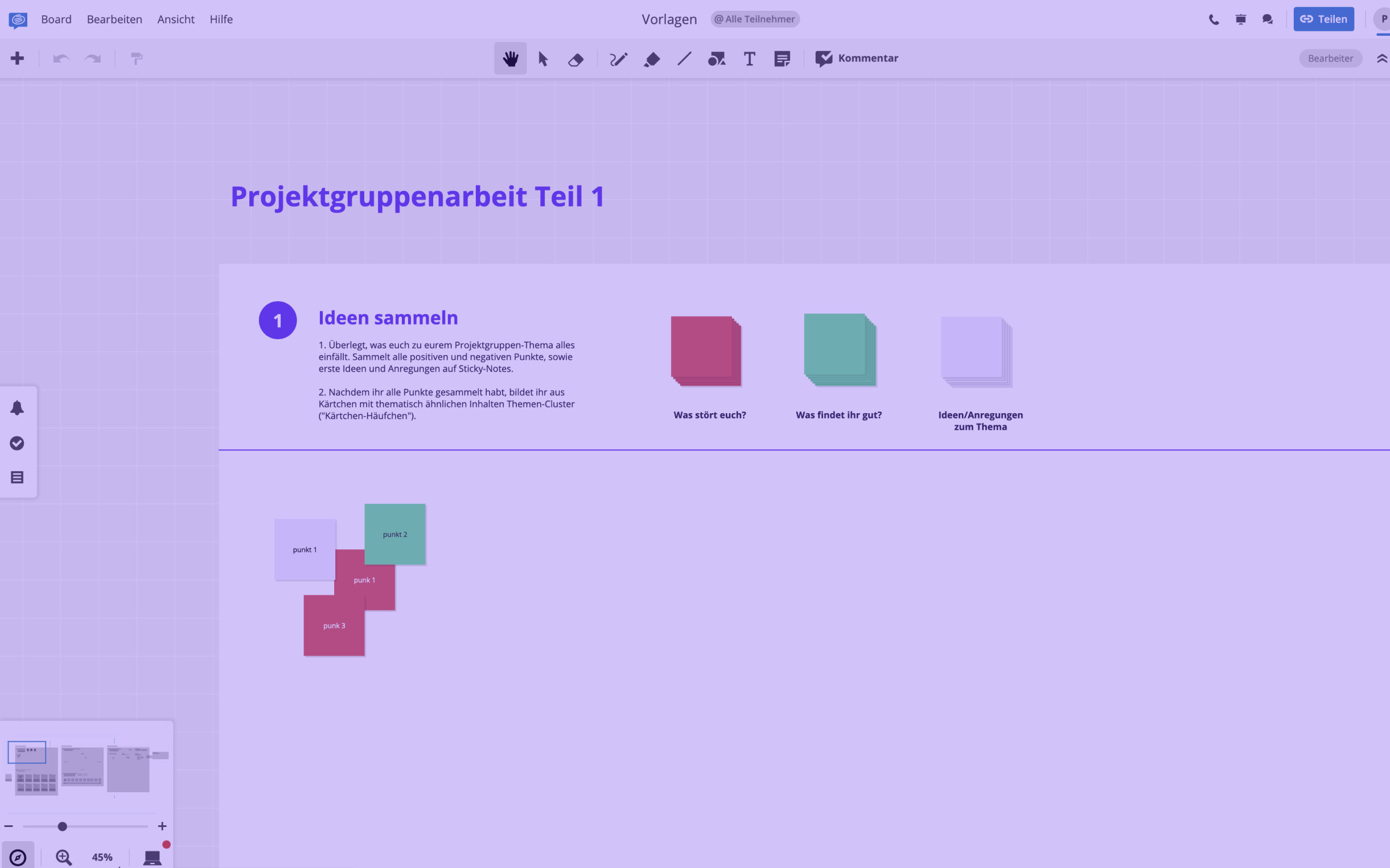 The local Newspapers Leonberger Kreiszeitung interviewed us on our engagement for the Youth Commitee of Leonberg. Read the article here (German only)

Within the administration and the youth department of the city, we received positive feedback from all sides. In particular, the rapid development of the tool and its significant contribution to the success of the event was acknowledged.

We also got very good feedback from our young participants. They enjoyed how the event was structured and the way they worked in groups. Especially the broad-based survey was answered with honesty by more than 300 teenagers from Leonberg.

At the moment, we are planning to further develop the tool with the aim of integrating it into the youth work in the long term. In doing so, we want to support both the internal processes of the Youth Committee and the external communication. For this purpose, we are currently in an extended research phase in which we want to exchange ideas with other Youth Committees of German municipalities.

Let's get in touch!